Something weird is happening in my photo collection, and I don’t think I’m the only one it’s happening to.

First, some background. I got my first digital camera in 2003. It was a bit out of date even for the time as it was all of 1.3 megapixels, and it didn’t even have a screen on it: you had to wait until you got home and copied the pictures onto your computer before you even knew what you took a picture of. Awful as it was, though, it got me in the habit of taking lots and lots of pictures of entirely paltry things and, before long, I’d established  a decently sized photo library.

Two years later, the march of progress (and the fact that I dropped my old camera in a lake) dictated that a new camera was in order, so I upgraded to one with 3 megapixels, almost twice what my original had. That camera tended to take much better images, and the increase in quality across my burgeoning photo library was hard to miss. In 2007, my camera technology updated once again, this time to 8.1 megapixels.

Then a curious thing happened.

Suddenly, around 2011, my megapixel ratings took a dive into the 0.7 megapixel range. That’s zero-point-seven. I’m talking seven kilopixels. What once was a collection of glorious, full-color, detailed-down-to-individual-grains-of-sand images was now a haphazard clump of grainy, portrait-oriented, postage-stamp-sized blurs.

The reason for this pretty dramatic nosedive is easy to trace, and it stems from the fact that hauling an actual digital camera around kind of sucks. You don’t want it to get hurt, so you keep it in a fancy, padded case. You also need to make sure it’s always got good batteries in it or that the rechargeable battery has been removed, charged, and replaced every time you go out. Then, on the off chance that something interesting actually happens, you need to be able to get it out, turn it on and take a picture with it at a moment’s notice. On a busy street or in a crowded store, it’s kind of awkward to lug out your tripod and telephoto lens just to get an ironic picture of a singing Justin Bieber toothbrush to post on Facebook. 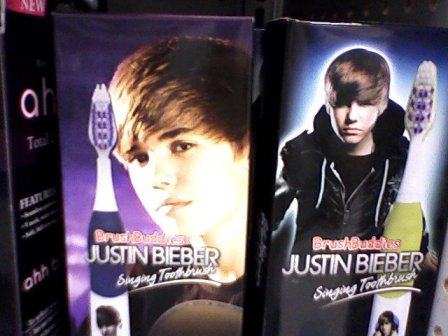 You thought I was joking.

What isn’t very awkward, though, is whipping out your cell phone – which you probably had in your hand anyway – and snapping off a quick picture… and this is why the quality of our pictures has taken a dump in recent years. It’s kind of counter intuitive, actually: you’d think that advances in technology would lead to even more detailed images, but what is actually happening is that we’re getting crappier images that are more convenient to take.

DVDs and VHS tapes are a great example of the disconnect between advancement and convenience, except that DVDs and Blu-ray discs and so forth work the other way ’round: they offer far better quality, but at the expense of convenience.

We all remember those heady days of the VHS tape, right? Yeah, those days sucked, but VHS was still a pretty convenient format. One of the (potentially) great things about VHS was the ability to record anything that happened to be broadcast on television on a whim, and at a moment’s notice. When I was a kid, I had a VCR in my bedroom and used to keep a blank tape loaded constantly, just in case anything good happened. In theory, this would have allowed me to archive, for posterity, any incredible, world-changing events that were televised while I was watching TV. In reality, though, it mostly just left me with a lot of incredibly dated commercials and a bunch of clips of Jill Brown forecasting the weather.

Oh, come on… you know you had a crush on Jill Brown, too. 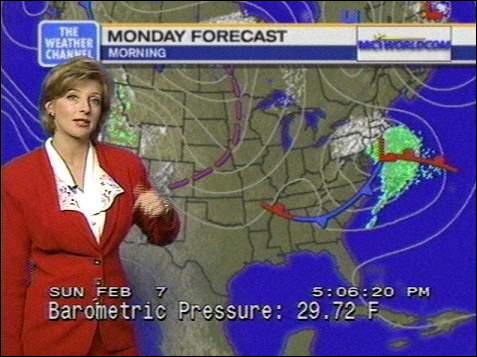 Shut up, you know you did.

The closest thing we’ve got now to a VCR is a DVR and DVRs, though offering much better image and sound quality, and the ability to rewind live TV (which is actually pretty nifty, though the semantics of whether live TV you’ve rewound is still “live” at all confuse me), don’t offer quite the versatility that VCRs did. Hell, in my experience DVRs can’t even manage to record a TV show properly without cutting off the last eight seconds of the episode which were absolutely vital to understanding some new character development and which now you’ll never get to see until the show is rerun in the summer, and then only if your DVR doesn’t cut off those last eight seconds again. And don’t think you can just hit pause and stop recording when the commercials come on, like you could on a VHS recorder: no, you’re stuck fast forwarding through them later, at a rate just slow enough to make damn sure you SEE every single advertisement.

Some of this stuff doesn’t hold up to abuse quite as well, either. If I accidentally drop my shiny new Blu-ray disc and it gets the tiniest of scratches, you know it’ll never play right again. In fact, if your DVD or Blu-ray player is of the, er, “inexpensive” variety, the act of simply playing the disc can damage it. Then you end up freezing on the same scene in Rocky II every time you watch it, and you have to restart everything, sit through the stupid intro stuff, and then select the next scene in the sequence to continue the movie.

That’s another little niggle I have about the whole DVD or Blu-ray thing. You remember fast forwarding past all the garbage at the beginning of the VHS tapes? There was the copyright warning, the studio logo, all those silly previews that were pointless almost the moment you bought the thing because the previewed movies had been out for years by then. When I owned actual, official VHS tapes of movies, I used to keep track of where on the tape those things ended and, when I rewinded it, I’d make sure to stop the tape AFTER the introduction nonsense was done so I wouldn’t have to sit through it the next time.

Can’t do that with a DVD! No Sir, with a DVD we have to sit through all that opening junk each and every time we start it up. In addition, we also have to contend with the DVD menu, which unfolds and lurches along on screen at an utterly geological timescale. It’s as if every DVD manufacturer is hopelessly trapped in 1991, adrift in an endless ocean of awful 3DO games. Why can’t we just put in the DVD and watch the damn movie already? Not everything published on optical media needs to be an “interactive multimedia experience”!

Sure, VHS tapes had their downsides. They could break and the machines could get old, for instance, but there’s something about that old magnetic media that just seems to keep better. They usually degrade over time rather than catastrophically implode, and if there is a major fault like a break, you can generally fix it with scissors and some tape. Either way, regardless of how badly things had degraded or how many times you had repair it, you could almost always get enough scrambled-porn-quality video or distorted audio to be able to identify what it was you were supposed to be watching. 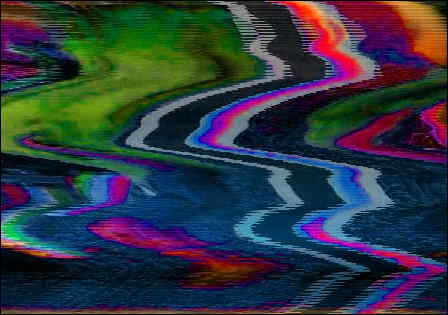 I had a lot of VHS tapes in my time, but I’ve almost completely eschewed DVD and Blu-ray in favor of digital formats like iTunes, which do not include anything that you can’t fast-forward past. This format has its own drawbacks, usually in the realm of rights management, but at least it isn’t anything as nefarious as making you manipulate a DVD menu.

So what’s the answer, then? Where does it end? Are we forever cursed to have either quality or convenience, but never both at the same time? Will I never get to see the last eight frikkin’ seconds of the final episode of House?

Who knows. I guess you could look at the bright side of all of this: DVD and Blu-ray discs teach us patience and anger management, by forcing us to sit through opening nonsense and obtuse menus. And with postage-stamp-sized, sub-megapixel photos, think of the money you’d save on paper when printing out physical photo albums. A photo album of that size could even fit in your purse or wallet!

And that’d be real convenient.

4 Responses to Suitable for Framing

none of this actually exists

writing from the vaults of audrey p. farnsworth

Life! Some survive, others just live through it!

"If you are resolutely determined to make a lawyer of yourself, the thing is more than half done already" - Abraham Lincoln.

randommusings
this is... The Neighborhood

the Story within the Story

The best things in life aren't things at all