Occasionally, like most modern humans*, I have to travel places for one reason or another. For the sake of convenience or necessity, this travel often takes the form of a commercial airline flight. In fact, I’m writing the draft of this on a 737 somewhere between Baltimore and San Francisco and, though I’d much rather drive (or fly) myself, my car is far too elderly for 3,000 miles in one shot, and I haven’t got a plane at my disposal, so a commercial flight is really the only way to go.

The only thing I can say about this is: good grief.

Traveling is rough enough as it is, what with the lack of coordinated time zones and jet lag, rental car paranoia, weird regional foods, exotic bathroom spiders, overabundance of dead hobos in your hotel room (that’s not just me, right?), and inability to find a decent sandwich or slice of pizza (I’m lookin’ at you, Chicago). When you’ve already got a ton of suck to deal with, the actual “getting there” should be the least stressful aspect of the adventure.

In fact, the time spent airborne used to be what I liked best about traveling. I remember the first flight I ever took on a commercial airline: it was in 1989 — I was ten — and it was a Continental Airlines flight from New Jersey to Florida. I was flying coach (which I guess is what they call “economy” now) and the whole journey only lasted about three hours. What I remember most, though, is that you could get up and walk around the plane with some marginal degree of comfort (go figure, right?). Also, despite it only being a three-hour flight, they brought you real food! It was during that plane trip, somewhere over the Carolinas, that I experienced my first salad. I also got a pretty bitchin’ turkey and Swiss sandwich, on this weird rye bread that was loaded with sunflower seeds. I think there might’ve even been potato salad!

Today, conversely, I find myself in the third hour of a six hour trek via United — over what I can only imagine is Colorado or Nebraska or somewhere else that nobody wants to go — crammed into a seat that appears to be made entirely of cardboard, and I’ve yet to see even a single Biscoff cookie. Those things are rad, and most other flights I’ve taken lob them at you with wild abandon. I’ve managed to secure a single can of Coke — not even booze — which I am coddling like a child and holding between my knees because what they allege is a tray doesn’t have any cup holders. It hasn’t even got those fake cup holders that are really just vaguely cup-sized indentations intended for people that apparently need direction, but which don’t actually “hold” anything. It’s just a sad, flat board on a hinge.

You ain’t fooling nobody, “cup holder”.

Not that it’d make a difference, because I can’t lower the tray anyway: within five minutes of takeoff, the guy in front of me, who is wearing a pink satin sleeping mask, cranked his cardboard seat back so far into my lap that I could probably give him a shave, were they to allow shaving implements on the plane, which they do not. I don’t know what he looks like from the front, but I heard him request a baguette from one of the flight attendants, on an airline that doesn’t even have bloody Biscoff cookies, AND get snippy when they didn’t have one, so I’ve taken to calling him “Douchie McAsshat”. In my slightly-more-aggressive-than-passive way, and much to the chagrin of the reasonable passengers (who can see what I’m doing), every time he appears to have fallen comfortably asleep, I remedy that by jabbing my knees violently into his seat, blowing gently and creepily on the back of his head, or tapping out the drum parts from Alice Cooper’s “I’ll Bite Your Face Off” on his headrest. 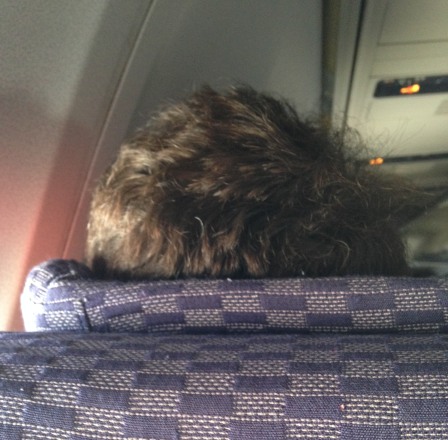 This man wears an ass for a hat.

He doesn’t seem to have gotten the hint.

Leg room is a bit of an issue on these flights anyway, particularly for someone that gangles as much as I do, and the fact that Douchie’s seat-back is craned at 160 degrees over my lower body now makes it completely impossible for me to stand up, at least without tea bagging the dude. So I’m left smushed into a tiny cardboard seat, my legs forced to awkwardly divert and invade the leg spaces of my neighbors, while I stare at the top of Douchie’s head and crankily gripe into an iPad.

In case you thought that the flight couldn’t possibly be all bad, well… there are a couple of tiny, tiny creature comforts, though the airline’s buck grabbing ruins them, too. For instance, the backs of the seats all have LCD screens built in. During taxi and takeoff, these LCDs play commercials that can’t be turned off or muted — and are, strangely, mostly commercials for the airline that we’re already flying on — but once airborne, they allegedly show movies and stuff, or even just display an overhead map showing where the plane is… which is sort of cool, except for the fact that they won’t do this unless a credit card is swiped in the conveniently-placed credit card swipers, built into the seats next to the screens. Honestly, though, why would anybody in their right mind want to pay $7.99 to watch Biodome on a seven inch screen that, due to Douchie McAsshat’s seat angle, is pointed squarely towards one’s crotch? Not paying means that all I (or my crotch) can see is the service demo of Wolf Blitzer soundlessly howling words into space. I can turn the LCD off — by holding down the brightness button for ten minutes until the screen eventually gets dark enough to not see anymore — but the location of the controls, embedded exactly where elbows go on the unpadded metal armrest of the plane’s cardboard seats, means that every time I relax my arm even slightly, I hit a button and turn it back on.

I get that, after 9/11, people weren’t flying and the airlines were struggling to stay afloat, but those initial days of nervous airplane paranoia are over (for most of us, anyway), and I refuse to believe that United Airlines is hurting for cash so bad that they can’t provide me with a frikkin’ saltine during a six hour flight. Between the ticket prices of the 150 or so passengers they pile on top of each other, plus the charge for each checked bag ($25 for mine), the eight bucks they bludgeon you for just to get a paper cup of orange juice, the revenue from the commercials that are played in-flight, AND the almost laughable average starting salaries of the pilots and flight crew ($36,000 per year, according to the Wall Street Journal) you’d think they’d be more than profitable enough to toss me a goddamn cookie.

To be fair, my return flight — with Delta — was much less terrible, cost about the same, and I had Biscoff cookies lobbed at me with wild, carefree abandon again. Additionally, they also handed out free headphones, blankets (which I brought home for my dogs), and drinks, and there was significantly more room despite the plane (a 757) being packed to capacity. Even on my connecting commuter flight, aboard a plane that was barely big enough for me to stand up on (an RJ145, in case you’re wondering), they gave us snacks and drinks, and my legs were able to gangle relatively freely. Finally, while there was a kid that made faces at me (and to whom I gesticulated my eyebrows back at), there was no jackass in a velvet sleep mask jamming his torso into my personal space.

I suppose the easy lesson here is not to fly United, but I think the problem is bigger, and endemic to the entire travel industry, which has gone from being about getting you someplace with comfortable service in order to keep your business, to being about serving up advertisements while wringing every last dollar out of your wallet while they’ve got you there.

That last point is an important one: airlines want to get whatever they can out of you while they’ve got you because the chance of you flying with them again out of brand loyalty is practically nil. Remember those commercials showed on the plane’s chintzy LCDs? It’s brand loyalty that is what most of them were pushing, and which has evaporated because of ticket brokers like Priceline and Orbitz. Granted, these services do help you find the cheapest tickets available, but they don’t encourage the kind of brand loyalty that ultimately leads to a better experience.

Because the ticket broker services offer up just the cheapest tickets without consideration for other aspects of my flight, United doesn’t need to worry about providing me with cookies, real seats, or oxygen, because the nature of the system almost guarantees that I won’t be back, and if I do it’ll be purely because the seats are cheap, and not because I like the airline. Indeed, the tickets that these brokers served me were United and Delta. While that might be good for my wallet, it isn’t great for an airline that wants to convince me to fly with them more.

I think that, in the future, I might just book directly with Delta. It might be a few more bucks than whatever I might find with one of the cheap ticket brokers, but at least I’ll continue to have Biscoff cookies lobbed at me like confetti, and my continued business will hopefully encourage them to continue lobbing Biscoff cookies at me. Maybe if enough of us do that, United will take the hint and start keeping a few bags of chips around for the people that keep coming back.

Or, maybe, I’ll just smuggle some Wheat Thins onboard, next time.

* Ancient and/or prehistoric humans also had to travel places (see here, here, here, and here), though they tended to do so generally slower, and with far less pushing at security checkpoints.

none of this actually exists

writing from the vaults of audrey p. farnsworth

Life! Some survive, others just live through it!

"If you are resolutely determined to make a lawyer of yourself, the thing is more than half done already" - Abraham Lincoln.

randommusings
this is... The Neighborhood

the Story within the Story

The best things in life aren't things at all